Welcome to the website for the St. Declan’s Way Pilgrim Path. 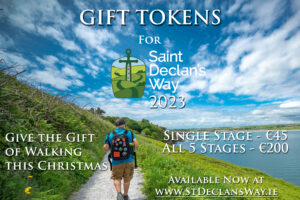 The St. Declan’s Way walking trail will be closed to walkers for one day on Thursday, December 8th next. This closure applies to all sections of the route which are not on public roads. It is being carried out in accordance with the permissive access agreements with landowners along the trail route. For further information call Waterford LEADER Partnership on (058) 54646.

Please keep in mind when walking the route:

Close gates behind you, especially in larger groups. Arrange for someone to be at the rear of the group to close gates once everyone has passed through.

There are portions of the route where you will pass dogs at houses or on farms. Animals on the route are used to passing traffic, it is safe to ignore them. None are dangerous, please do not chase or threaten them.

Saint Declan’s Way is a pilgrim walking route linking Cashel in County Tipperary and Ardmore in County Waterford. It follows the route that Declan took when going to Cashel to meet Saint Patrick in the fifth century. In turn, it is the way that Pilgrims have taken to visit Saint Declan’s monastery, holy well and grave in Ardmore for the past one and a half thousand years.

The route was approved by Sport Ireland in July 2021 as a waymarked long-distance walking trail. It is listed on the National Trails Register and is fully insured. At a ceremony held on September 29th 2021 in Mount Melleray Abbey, the path was officially opened by Heather Humphreys, Minister for Community and Rural Development.

The trail begins at the car-park of the Rock of Cashel passing through Cashel, Cahir, Ardfinnan & Goatenbridge in South Tipperary. It then crosses the Knockmealdown Mountains into West Waterford going through Mount Melleray, Lismore, Cappoquin, Aglish and finishing at St. Declan’s Monastery in Ardmore, Co. Waterford.

Anyone who wishes to walk the route can now follow the Blue Waymarkers (with added SDW Duibhín Deaglán Navigation arrows) to negotiate St. Declan’s Way from Cashel to Ardmore or vice-versa.

To be kept informed with updates either sign up for an email (right hand  side of the page) or Follow the St. Declan’s Way Facebook Page.

The St. Declan’s Way Committee, a voluntary group with representatives from along the route, having been working since 2015 to revive this ancient pilgrim path.