St. Declan’s Way is a modern walking route linking the ancient ecclesiastical centres of Ardmore in County Waterford and Cashel in County Tipperary. The route most commonly associated with St. Declan’s Way is 56 miles (96 kilometres) long and crosses the Knockmealdown Mountains at Bearna Cloch an Buideal (Bottleneck Pass), an elevation of 537m.  The waymarked route, because of height restrictions on National Walking Trails, does not cross the pass, and is longer at 115km. Apart from this mountainous stretch, the route passes mainly through the undulating farmland of south Tipperary and west Waterford.

St Declan’s Way Walk utilises the route of several ancient and medieval pilgrimage and trading routes such as the Rian Bo Phadraig (Track of St. Patrick’s Cow), Bothar na Naomh (Road of the Saints), Casan na Naomh (Path of the Saints) and St. Declan’s Road. The current route is based on a route mapped out and developed by Ardmore Enterprise Cooperative in the mid-1990s and tries to remain faithful to the ancient highways where possible.

St. Declan was a fifth century saint who brought Christianity to the southern part of Ireland and, particularly associated with the Deise tribe in Waterford and south Tipperary. He established his monastery in Ardmore and his grave there remains an important place of pilgrimage. Cashel was the seat of the Kings of Munster in Declan’s lifetime and St. Declan’s Way follows the route he would have taken from Ardmore to Cashel.

As with most saints, there is a relic of St. Declan that is reputed to have curative properties. In St. Declan’s case, the relic disappeared from his grave many years ago, current whereabouts unknown. St. Declan’s Relic, known as the Duibhín Déaglán (Declan’s Black Relic, pictured right). There is a fuller account of the relic here on the Ardmore Waterford site.

St Declan’s Way has been the subject of two books: ‘Along St. Declan’s Way‘ by the late Siobhán Lincoln of Ardmore. Siobhán’s son, Dick Lincoln, remains quite active in the redevelopment of the route.

More recently, the trail featured in ‘Castle, Follies and Four-Leaved Clovers’ by Rosamund Burton, a native of Lismore, now living in Australia.

The Genesis of the most recent upsurge in walking of this route, all the way from Cashel to Ardmore, was in a special Gathering St. Declan’s Way walk from July 24th to 28th 2013 organised by local activity group, Knockmealdown Active. The group has walked some portion of the route every year since (check the News section and our Facebook page for details of upcoming events). 110 walkers attended this walk in total, from right across the globe, with participants from Australia, the USA, Canada, the UK and the Cayman Islands. The Gathering, South Tipperary Development Company and Knockmealdown Forum in Waterford all supported the event.

Several Transition Year students from schools around Tipperary and Waterford have also undertaken St. Declan’s Way. They normally complete it over three stages rather than five.

For the 2013 event, large overgrown sections of the path needed significant work to get them to a walkable state. The regeneration of the path has gained considerable traction since then. Constant work and dedication from Knockmealdown Active in Tipperary and the Knockmealdown Forum in Waterford, along with the support of the Pilgrim Paths of Ireland group, the Development Companies in both Tipperary and Waterford came on board, forming a cross-county forum to further the aims of regenerating the route.

This group, chaired by Conor Ryan, along with help from Terry Cunningham,  mapping much of the route. This forum along with the development companies and local councils raised grant funding for the regeneration and waymarking of the route in its entirety, a project started in late 2017.

The route re-opened to the stage where it was possible to walk it all in 2018. To celebrate this Knockmealdown Active compled all 5 stages on the last Saturday of each month from March to July 2108. The event was a tremenduous success, attracting over 1,500 walkers from all over the world. Waymarking was to complete in 2020, but COVID prevented this from happening. It did eventually complete in the summer of 2021. Sport Ireland inspected the route in June 2021 and cleared for full opening the following month. It is now fully insured and included in the National Trails Register. 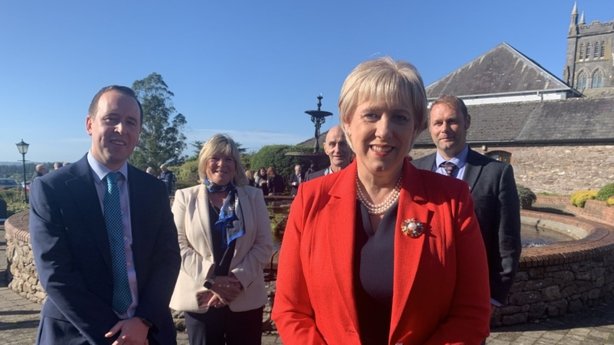 At a ceremony held on September 29th 2021 at Mount Melleray Abbey, Heather Humphreys, (pictured on the right at the ceremony) Minister for Community and Rural Development, officially opened the path.

Knockmealdown Active organises annual full five-stage events on the route every year, except for 2020, when COVID caused its cancellation.

For details of upcoming events on St. Declan’s Way, monitor this website and our Facebook Page – www.facebook.com/stdeclansway.